After three years, TeamPWCF returned as an official charity at the Long Beach Marathon/Aquarium of the Pacific 5K. It was a beautiful race weekend filled with raising awareness.  Representing eleven loved ones who have Prader-Willi syndrome, TeamPWCF had thirty-three people participate in all four races. Thirty-one people, (including seven individuals with PWS), did the 5K; four people did the half marathon (three of whom also did the 5K), one person did the full marathon, and one person did the bike race (he also did the half and 5K). 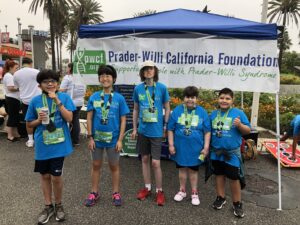 TeamPWCF also raised over $9,000 in donations; our top fundraisers were:

In addition to the money raised, the event is a huge public awareness opportunity. On Friday and Saturday, we had probably close to 1000 people stop by our booth. Though most people just visit to spin the wheel and pick up a giveaway, it gives us a chance to give them a quick overview of PWS and pass out some information. We always have a few people who have heard of PWS and our happy to see us having a public presence, and there’s also always some people who have never heard of it who take time to ask questions and learn more.  At the finish line festival on Sunday we passed out over 500 information cards to racers. And our TeamPWCF shirts are highly visible on the race courses; people do read them!  Getting “Prader-Willi syndrome” in front of people helps foster understanding, compassion, and hopefully increased funding for this rare disorder.

Thanks to all of TeamPWCF who participated, those who volunteered, and those who donated. We hope to see more of you next year.

Our Half Marathon Participants:

Photos of the weekend can be found here